NanoTech or Nanotechnology has proved to be the key technological revolution in the 21st century, gaining huge popularity worldwide. Presently, nanotechnology is being applied in almost every industry vertical, including electronics, food, biomedicine, and textiles. It improves existing industrial processes, applications, and materials by scaling them down to the nanoscale to fully exploit the unique quantum and surface phenomena. That’s why businesses are gravitating toward nanotechnology to improve existing products by creating smaller components and better-performing materials, all at a minimal cost.

The concept of Nanotechnology is nothing new as it has been used for more than 30 to 40 years. For instance, chemists have been making polymers for several decades, and through nanotechnologies, the tiny features on the computer chips have been created for the past 30 years.

Natural Carbon can exist in two different types, i.e., graphite and diamond, but from the year 1985 to 2004, through nanoscale technology the, three new additional forms were discovered that caused massive excitement among researchers about carbon nanomaterials which were carbon nanotubes, fullerenes, and graphene which is often termed as ‘wonder material.’

Today, we have smartphones of various sizes with several features, and these wouldn’t have been possible without numerous microelectromechanical systems (MEMS) devices that came forth in industrial manufacturing some 20-30 years ago. Later, researchers took a step ahead and started exploring another level of miniaturization through – nanoelectromechanical systems, which are sensitive detectors of charge, energy, and displacement.

However, with the advancement in newer tools, individual molecules and atoms are examined carefully, which has opened the door for the expansion of nanotechnologies with fresh concepts. Therefore, NanoTech can be considered the future of advanced development.

Applied Technology Review presents the “Top 10 NanoTech Solutions Providers - 2022” who are one step ahead of the curve in resolving the daunting challenges in the industry today. 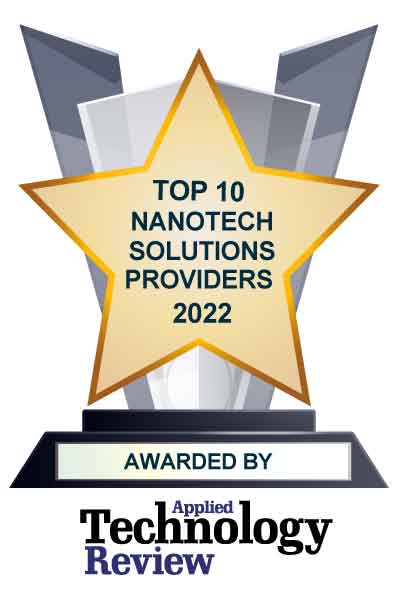 Our subscribers nominate the companies with whom they have collaborated and gotten results. If you think there is a company that deserves to be on our upcoming prestigious annual list of Top 10 NanoTech Solution Companies , please write to us about them and the reasons you think they need to be on the list

Your nomination request for upcoming annual list of "Top 10 NanoTech Solution Companies " has been Successfully Sent . We will be in touch with you shortly.